The Pieces Of Fate Affair
A woman has written a scandalous novel - it and she are obviously based on ‘Valley of the Dolls’ and its author. This was okay but sadly still suffers from season 3’s plodding adherence to the unrelenting torment of bad writing and odorous acting. Solo’s hair is Brylcreemed and there is talk about an anthrax attack.
The book recounts clashes between UNCLE and Thrush and something must be done. Did the stars feel no sense of obligation to ensure script quality? Both stars seemed to disavow the show in later life. Sigh.
There is mumbling about Thrush diaries and the author gets amnesia and Thrush baddies telegraph their villainy. Solo has obsessive lust. Why is the author in a babydoll nightdress at UNCLE HQ? The baddie, Zark, wears an oven glove spray painted silver on one hand for some reason. He does not cause dark foreboding and does no constructive gestures. What is with the mustard coloured shag carpet?
A book reviewer is a Thrush assassin. Season 3 was not up to expectations. There is whining and this was written by Harlan Ellison. The author acts like a kid and things do not happen for the most cogent reason. There was no ingenuity just fistfights.
Best Lines:
“Provocative hour of conversation.”
“An American Nazi.” 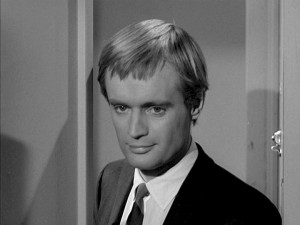 The Matterhorn Affair
There is no crescendo of evil, just incomprehensibly stupid goings on in this sub-optimal ep. This was terrible with fistfights and no kinetic fury or intriguing questions or trepidation. Baddies have generalised grievances. People wander around the Swiss Alps which looks like the MGM backlot. People are tied up, badly. Illya demands black coffee off Solo. This is the world’s intelligence capability? There is incredibly obvious bad ADR. A slow man is bothered by baddies and there is idiot comedy.
Best Lines:
“Didn’t you ever read Heidi?”
“Cut you up with this knife in my pocket.”
“Working the back alleys.”
“I’m Illya.”
“I don’t feel too good myself.”