Movie Reviews: One Spy Too Many + Love, Rosie + The Witches

One Spy Too Many (1966)
This ‘The Man From UNCLE’ movie stars Robert Vaughn, David McCallum and Rip Torn and is built around the horrible ‘Alexander’ 2-parter from season 2. Yvonne Craig pops up as an annoying UNCLE agent and there is cheesy slo-mo as a bald guy beats up people. It is unpropitious that this is based on the horrible ‘Alexander’ 2-parter. This has no creative whimsy or morally terrifying villain.
The megalomaniac Alexander (Torn) steals a bio-weapon that he never uses and is not intrinsically scary or lethally cunning. The show didn’t have the long-lasting appeal of ‘Star Trek’ or ‘Mission Impossible’. Alexander’s estranged wife does mannered over-acting. Craig sunbathes in skimpy swimwear at work for no clear reason showing off her unworked-out torso.
By today’s standards Solo is a pervert. Characters scamper around the MGM backlot. Illya is menaced by farm machinery and flails in a filthy puddle. Alexander is not a potent presence and has no real tangible reason for anything he does. Illya ends up in his saggy underwear. Someone flails in cake. This is different from the TV version. There was death and Waverly finds it hilarious that he pimped out his niece (Craig) to man-ho Solo.
Best Lines:
“Will gas.”
“Industrial empire.”
“I would not let you exist without me.”
“What do you think of the human condition Mr Kuryakin?”
“I’m in favour of it.” 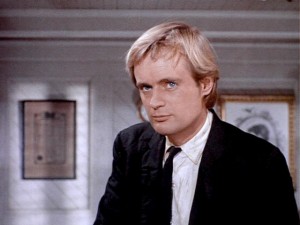 ~
Love, Rosie (2014)
A girl loves a jerk for 12 years even as he marries two other women to spite her and mocks her for being a single mother. They still end up together. This was gross.
~
The Witches (1966)
Joan Fontaine stars in this forgettable Hammer film about witches with sinister motivations.
Best Line:
“Give me a skin for dancing in.”
Tags: man from uncle, movie review
Subscribe
Comments for this post were disabled by the author