Crisis On Earth-X Part 1
EarthX is a Nazi hellscape with a red sky, zeppelins and swastikas. Why is the Dark Archer an archer? Why do the doppelgangers wear masks? X-Guardian dies at the hands of the Dark Archer. There are special opening credits for this crossover. There is bad VFX and Killer Shark is back and Iris whines about her wedding. Felicity has no concept of threat or jeopardy or mandatory story structure. Previous crossovers have been lost chances. The Legends do Robin Hood. Nobody has motivation or credibility.
The EarthX lot are violently aggressive. Mon-El lurks and Kara whines. How did Kara get a wedding invite from another world? Why is Supergirl disguised as Kara on Earth1? How is Oliver able to leave Star City if he’s on bail? Barry goes on about how he has stalked Iris since he was 10. Ew. People talk about relationships like this is ‘Dawson’s Creek’. The EarthX Overgirl wears dark red lip-paint.
Do people know Harry is from Earth2? Cisco whines and annoys. Dark Archer is the Fuehrer. Oh come on! Why is Mick at the wedding? Sara and Alex hook up. Joe obviously prefers Barry to his own kids. Oliver’s neediness annoys. Singh doesn’t recognise Mick? A waitress shoves her face in. I bet she is Iris and Barry’s future daughter. Kara sings. There is an inordinate amount of padding in this ep.

The wedding is attacked by the Nazis from EarthX. Overgirl flies and there is dress ripping. This was okay even if the majority of this ep was undifferentiated banality complete with liberal writer tracts. The Reverse Flash (who looks like Wells again) rants.
Best Lines:
“You would think that.”
“Bring hope back to this darkened world.”
“That flag died a long time ago.”
“Put on break up weight.”
“No longer under indictment.”
“Out doing what?”
“Hacks. Every one of them.”
“Nobody was clapping.”
“We have lost Prometheus.”
~
Crisis On Earth-X, Part 2
X-Prometheus is Tommy Merlyn. How do the others not know who Tommy Merlyn was? Oliver stares at the EarthX version of his dead forgotten best friend. X-Tommy smirks and stares and makes a speech showing how evil and dedicated to the cause he is. Colin Donnell makes the most of his long overdue one scene cameo.
There is newsreel footage and on EarthX, the Nazis developed the atomic bomb first and Hitler died in 1994. X-Tommy reveals he and X-Oliver are BFFS and he taunts Oliver and takes a cyanide pill. What did they do with the body? Reverse-Flash says he thought Merlyn was soft. Dark Archer aka X-Oliver is sad his BFF is dead. X-Oliver and Overgirl aka X-Kara are married.
Oliver overlooks seeing Tommy’s evil EarthX double commit suicide in front of him and instead decides to talk about his feelings with Felicity. The EarthX lot have conviction and determination as aptly demonstrated by X-Tommy. Stein is an ass. Sara has no reaction to X-Tommy. The heroes have no fierce discipline. This crossover is done fancifully. Knowing Oliver dramatically shortens one’s life expectancy in any world.
Where is Superman on EarthX? Oliver rides a motorcycle he got from somewhere. Dark Archer rants about moral weakness and degeneracy. The EarthX lot aren’t instruments of fear. Is the fact that the EarthX lot are the heroes’ doppelgangers supposed to be a surprise? Felicity’s defiant stance on making everything about her leaves one aggrieved. Everything about the EarthX lot and their outfits is defined to project the image that a surly teenage boy would find cool and edgy.
This was good. The heroes end up in a death-camp. The OTT Reverse Flash taunts Barry about how he’s not dead. Again. X-Kara and X-Oliver blather about the Fatherland. Where did Oliver get a kryptonite arrow? How did he get it? The X lot have apoplectic rage. X-Kara is dying due to being soaked in solar radiation. The X lot have moral commitment to the cause. X-Kara had a sister who tried to kill her? How does a heart transplant save X-Kara from solar radiation poisoning?
X-Oliver is commemorative of his Tommy. People talk about their feelings. There is a lock and load montage and Kara looks like she’s catwalk modelling. Where did Sara get her White Canary outfit? X-Kara is a General. X-Oliver attacks STAR Labs and seems sad at his life. Random stuff explodes during a warehouse fight. The fights are incoherent. The smug awful Curtis shows up. As does Metallo. Cue more incoherent fights! This had a version of Tommy Merlyn so yay!
Best Lines:
“He died for you.”
“The whole world is the Fatherland.”
“A place so awful so horrific.”
“There’s a 53rd Earth.”
“I’m sorry about Tommy.”
“It wasn’t Tommy.”
“So busy being unconscious.”
“Doppelgangers from the Third Reich.”
“This is not your Earth. Leave.”
“Go home and stay there.”
“I did hurt your friends. I really enjoyed hurting your friends.”
“Tommy killed himself.”
“I heard your Tommy died years ago.” 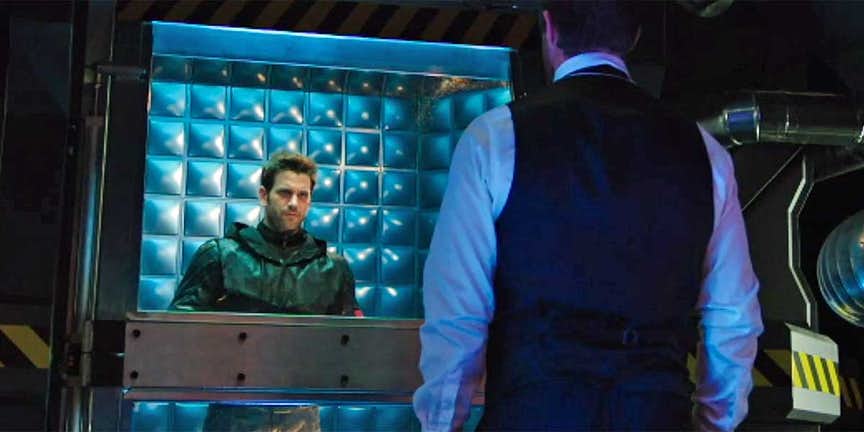 ~
Election Day
Nina questions Doug the pervert and sums up what she thinks made him the way he is. The FBI agent tries to talk sense into Jane. Why does Jane keep such reverent silence for Doug? The FBI agent plans something radical to escape. The vile reporter has ill-disguised suspicion. Ben has to do a line-up and Doug is there. Why is Ben protecting Doug and why do they have such a tolerable accord?
Hank used to have a proper job. Is Ben in some kind of debt-bondage to Doug? Is he under duress? TPTB continue their highly contentious way of making Hank the victim. Hank tries to make himself look good. Doug sneers and gets away with it.
John who is useless tells Nina to get gone. Jane ignores her newborn son. Jane prances around despite just having had a baby. The vile reporter seems to be re-evaluating her life but she‘s not, she‘s faking it. There is yelling and Willa is useless. Hank whines about how his life was ruined. He ruined his life with his own actions. Why should anyone care? The election takes place. Ben’s mother is located. Willa and Danny's mother needs to be needed but has been disabused of her illusions about Ben and has a dawning realisation that he is evil. This sucked.
Best Lines:
“A windowless pit.”
“No idea what he is.”
“We both how this is gonna end for me.”
“Folksy advice giving waitresses.”
“At the market.”
“For 2 days?”
“He’s not going to hurt you.”
“Yet.”
Tags: arrow, supergirl, the family
Subscribe
Comments for this post were disabled by the author